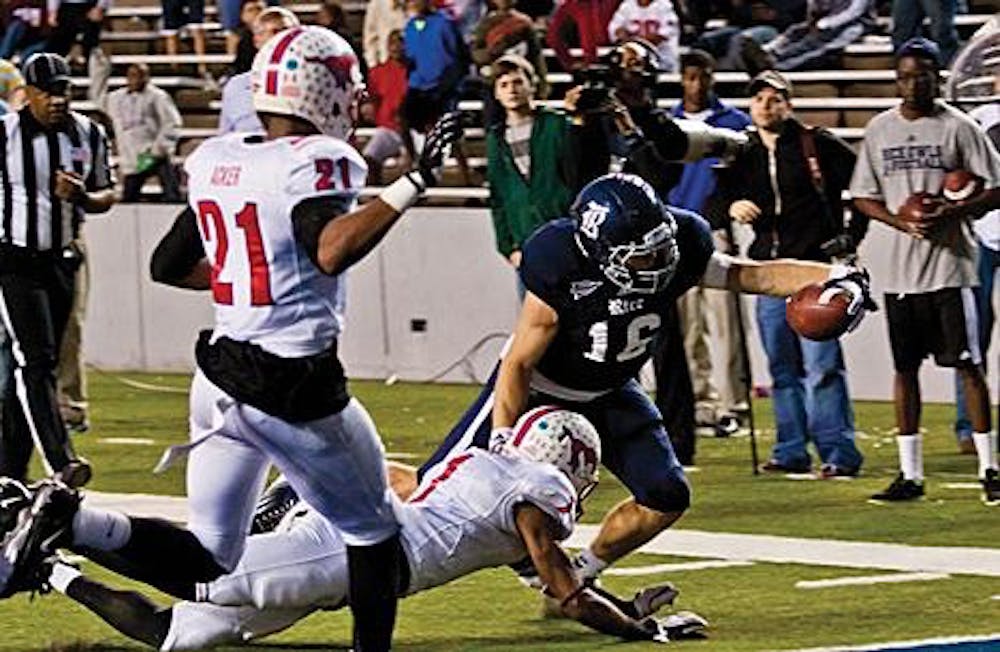 Quarterback Taylor McHargue attempts to fend off an SMU tackler while stretching out for extra yards. The Owls beat SMU 36-14.

For the third time in 50 years, the Rice University Owls will be traveling to a bowl game. After a big away win against the University of Texas at El Paso this past weekend, the Owls met the six-win requirement to go bowling - capping the improbable four-game winning streak needed for postseason play.

For a team that started the year 1-5, it was a feeling of ecstasy as the final seconds ticked off the clock. Few foresaw this outcome, with many inside the media counting the team out of bowl eligibility following a rough road loss at University of Memphis. It was not until the week leading up to UTEP that the Owls showed up in anyone's bowl projections.

"I think a lot of it was the locker room after the Memphis game," Head Coach David Bailiff said. "We knew we were good, and we had some little guy, Phillip Gaines, who said enough is enough. We're just too good. We had enough guys to draw a line in the sand, and that's the point where we grew up as a football team. I think we matured a lot that day."

With six primary bowl slot agreements for Conference USA, and only five bowl eligible teams, the only question the Owls have is where exactly they'll be traveling. C-USA has announced that Rice will be heading either to Fort Worth for the Bell Helicopter Armed Forces Bowl or to New Orleans for the R+L Carriers New Orleans Bowl, as C-USA likes to find locations as close as possible to home for their bowl teams.

The United States Air Force Academy has already accepted a slot in the Armed Forces Bowl to be played on Dec. 29. The Air Force Falcons also just narrowly snuck into bowl play at 6-6, losing three of their last four. University of Louisiana at Layfette, which has one game yet to play and could end up 8-4, has already committed to the R+L Carriers New Orleans Bowl. The Louisiana Ragin' Cajuns, who play in the Sun Belt conference, made national headlines a few weeks ago by just barely losing against the University of Florida, currently ranked fourth in the BCS, after letting Florida return a blocked punt with just two seconds left. The New Orleans Bowl would be played on Dec. 22.

The deciding factor will be the outcome of the C-USA title game to be played Saturday. University of Tulsa will be taking on the University of Central Florida, at Tulsa, with Rice's fate in the balance. A Tulsa win will send Tulsa to the Liberty Bowl in Nashville, Tenn., and Rice to the Armed Forces Bowl. A UCF win will send Tulsa to the Liberty Bowl, East Carolina University to the Beef O'Brady's Bowl in St. Petersburg, Fla., and Rice to the New Orleans Bowl game.

"All the work we put in, from the offseason to the fall camp to come in here, it took a team effort," linebacker Cameron Nwosu said. "All the seniors, man, they wanted to do it. This is their last year, and we have seven seniors on this team. Every week, we told the team play like it's our last. We told the team it's like high school playoffs: You have to win every week to get to the state championship."

Rice's rushing game led the way in the first half, with running back Charles Ross recording over 100 yards in the first two quarters. Paired with crisp passing from quarterback Taylor McHargue, the Owls found themselves with a 17-14 lead heading into halftime - not nearly the breathing room that they wanted.

With six minutes to play in the third quarter and the Owls still with a three-point lead, UTEP completed a 51-yard passing play over the middle, setting itself up at the Owls' 3-yard line. Rice caused a fumble on the goal line, but it was still recovered by UTEP in the end zone, putting them up four after the extra point.

A 56-yard return by running back Jeremy Eddington set up a Rice field goal on the very next drive, however, with kicker Chris Boswell successfully making a 51-yard field goal. The kick was Boswell's sixth from 50+ yards this season and brought the Owls to within one.

UTEP seemed poised to match the field goal on its next drive, advancing to the Rice 37-yard line. But, a huge open field tackle by defensive tackle Hosam Shahin, his sixth sack of the season, moved the Miners out of field goal range and forced them to punt.

With the ball downed at the 5-yard line, McHargue put on a quarterback clinic, leading the Owls 95 yards and 20 plays before Ross found the end zone on a 9-yard run. The drive had five third-down conversions. An attempted two-point conversion would fail, however, still leaving UTEP down less than a touchdown at 26-21.

The defense, hoping to hold the Miners scoreless and let the offense seal the game, forced a three and out and an ensuing UTEP punt. The Owls fumbled the punt, however, handing the Miners the ball back inside Rice field position.

The defense allowed two first downs on the ensuing UTEP drive but was able to hold the Miners to a field goal, protecting the Owls' lead. Senior defensive end Jared Williams was instrumental in helping stop the Miners from gaining their third first down of the drive with pressure on a key third down.

With the lead still two, and with over six minutes to play, the Owls needed a touchdown to seal the game. They got perhaps the Rice play of the decade, with Eddington returning the UTEP kickof 97 yards for the Owls touchdown.

"There can't be a more emotional 6-6 team The team has progressed in every aspect this season, looking like a completely different group than the one that stepped on the field against University of California Los Angeles. The defense, always the biggest question mark, has been capable of making stops in big instances, keeping the Owls in games.

And the offense, led by McHargue, has only put up less than 30 three times this season, claiming a place as one of the more dangerous units in C-USA. Granted, being guaranteed at least a field goal (thanks to Boswell) if you can get within the 35-yardline certainly helps.

And now, the Owls have one game left to end up where they always wanted to be: a winning team, with a winning record.