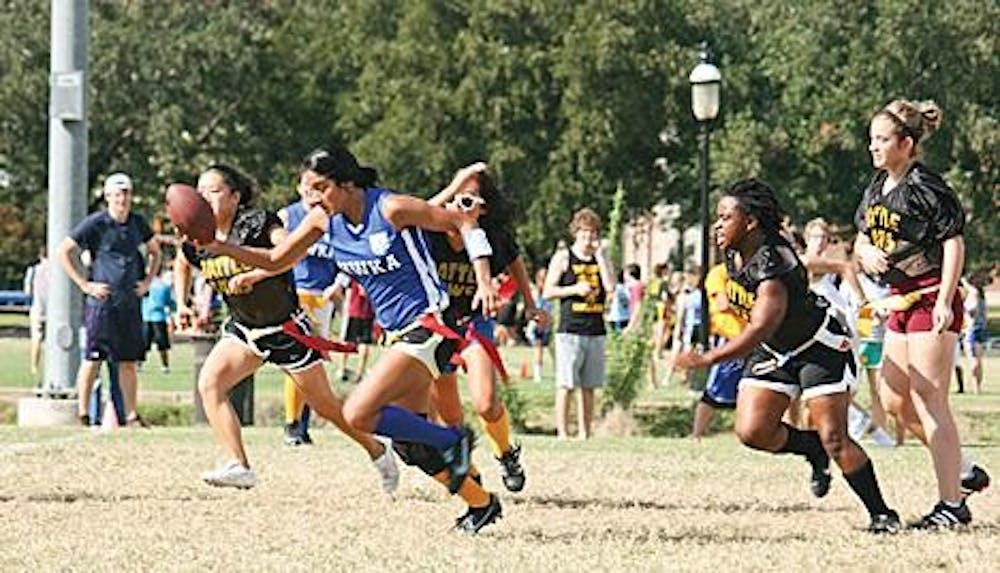 This game was a defensive struggle on both sides, with Brown College managing to scrape together a touchdown drive in overtime to clinch the game. The Graduate Student Association was without its starting quarterback in this contest, possibly accounting for the overall lack of scoring. GSA and McMurtry College were the two best teams in the North Division entering the week, and according to the standings still are, but neither looked too impressive this past week.

McMurtry College looked impressive early, scoring and seeming as though it would turn this game into a blowout. However, Jones College was able to battle back to go into the half down 13-6 before scoring in the final two minutes of the game to bring the game within one point. Jones then smartly elected to go for the two-point conversion to win the game, a decision we would like to take a second to praise.

Extra points in Powderpuff are far from given, and we would argue not nearly twice as easy as a two-point conversion, so going for two is almost always the probabilistically wise decision. To understand this with the game on the line is commendable, and the Jones coaching staff deserves credit for its decisiveness. McMurtry did not look good in this loss, but Jones also might be better than we thought in light of this victory and its narrow loss to Wiess College.

Martel College took care of business in this game, albeit in an unimpressive manner, winning in overtime after scoring and then intercepting Duncan College to end the game. Martel remains in the playoff hunt despite being under .500 and possessing a negative point differential. Martel is, however, 2-1 in the North Division. Winning games in-division is far more crucial to a team's playoff success than winning its inter-conference matchups, and Martel has done a solid job at this thus far. The playoff picture is wide open in the North, as Jones has a chance to sneak in with a couple of divisional victories. Brown also has a chance at the playoffs with a victory over Jones and a McMurtry loss to Martel.

In what was probably the most anticipated game of the week, Sid Richardson was able to defeat Lovett. The game was a hard-fought defensive battle, and Sid looked extremely impressive in victory. Sid went up 13-0 in the middle of the fourth quarter, but Lovett scored with slightly under two minutes remaining, stopped Sid on its subsequent drive and advanced the ball all the way to Sid's 20-yard line before Sid ended the game with a sack.

Lovett has displayed a tendency to fall down early in games before riding torrid comebacks to victory, but that pattern will not hold up against the tough competition of the South Division. This was a massive win for Sid and tightens up the race for the South, with Baker, Hanszen, Sid and Lovett Colleges all having legitimate shots at first place. As we have said before, sometimes it looks like the five best teams in the league are in the South, and it is truly a shame that Wiess College will most likely be on the outside looking in come playoff time.

As the score would indicate, this game was an absolute offensive showcase. Hanszen looked brilliant at times on offense en route to five total touchdowns in what was easily quarterback Audrey Chao's best game of the year. Chao accounted for all five of Hanszen's touchdowns, with three coming through the air and two on the ground, and if she can maintain something close to this level of play going forward, Hanszen has true juggernaut potential.

We criticized Hanszen's offense a little bit in this space in recent weeks, arguing that most of their scoring came either directly from its defense or as a result of the short fields its defense created, but the offense was truly on fire against Wiess. Wiess also looked quite impressive offensively and produced a point total that would be enough to win most weeks, but the team had the misfortune of running into a dominant opponent.

Hanszen leads the league in point differential by a mile at +57, which is 28 points greater than Baker's margin of +31. Baker's point differential is 28 points greater than that of seventh-place GSA, showing just how much better Hanszen has been according to this particular metric. The race for the South is going to come down to the finish and the favorite seems to shift with each passing game. Hanszen plays Baker in a critical game next week, which not only will go a long way toward determining playoff seeding but will also give us another piece of data in the ongoing discussion about the best team in Powderpuff, an argument that in our opinion currently comes down to one of these two teams.