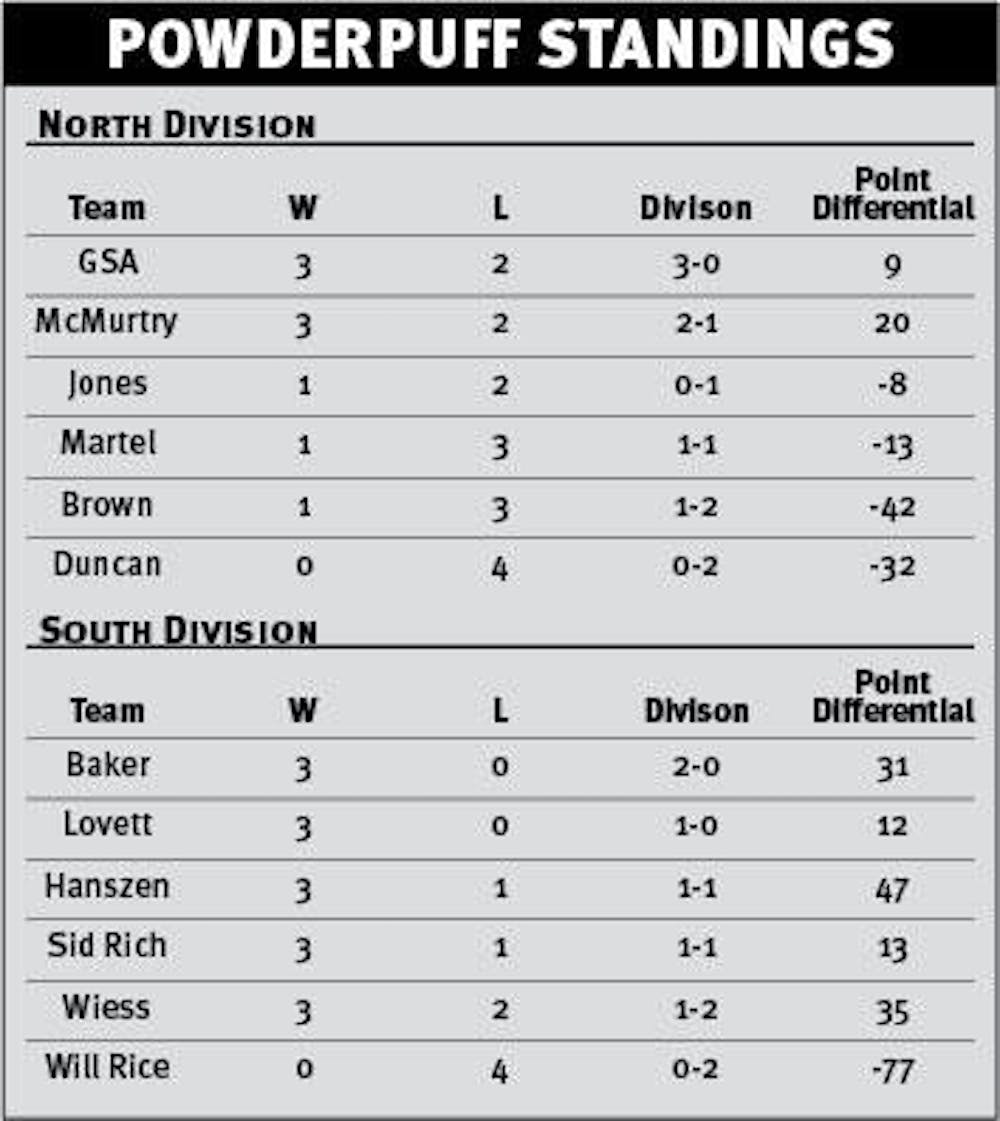 Wiess College was dominant in the first half en route to a 14-0 lead highlighted by stifling defense but faltered a bit in the second, allowing Jones to come within five yards of tying the game before it ran out of time. Wiess' point differential is still the second-best in the league, but this measure might be slightly inflated, as it looks more like the third- or fourth-best team.

McMurtry College was firing on all cylinders offensively early in the game and did a solid job overall defensively. Duncan College was able to put together a strong scoring drive late in the second half, but could not get the stop it needed to regain possession, and McMurtry was able to run out the clock to clinch the game.

McMurtry has progressed significantly since last season and has been the best team in the North Division thus far both according to record and point differential. We cannot say enough about the turnaround seasons McMurtry and Wiess are experiencing, as both have gone from tremendous struggles last season to serious contention this year.

This game looks like a statement game for the Graduate Student Association on the surface due to the lopsided score, but a closer look reveals that the team was not nearly as dominant as the final margin indicates. The GSA has fallen off from last season, when it outscored its opponents by 82 points over seven games. Discount this game and its point differential is still at -11 for the year.

Jones College was also able to move the ball downfield at times, but its offense stalled at inopportune moments, and threw a couple of costly interceptions, including two that were returned for touchdowns. Jones was actually favored by a touchdown by the Thresher, so we were way off, but again, this game was a play or two away from looking very different.

This game was a truly impressive victory for Sid Richardson College. We have been a little skeptical of Sid here at the Thresher and had actually favored Wiess by 6.5 entering the game, but Sid put on a performance worthy of title favorites.

Sid looked good offensively in the first half, but Wiess' defense held strong deep in its own territory, preventing Sid from finishing drives and forcing a turnover on downs on the five-yard line on Sid's first possession of the contest.

Wiess was unable to score until late in the game, and while its offense has grown by leaps and bounds since last season, it still has progress to make before it can score consistently against defenses like Sid.

This year Sid has displayed the ability to win close games and thus looks comparatively worse than the other elite teams in terms of point differential, but it left no doubt after this game that it belongs in the discussion for the title of best team in the league. As we have said almost all year in this space, Wiess is a very solid team. However, the South Division is absolutely loaded, and Wiess still might not be good enough to make the playoffs, a travesty since it would most likely be the best team in the North.

Martel College, as the score suggests, dominated this game from the outset. Still, its point differential stands at -13 after this massive victory because it has struggled in its other games this season. However, with the North looking weak this year, there could be hope for it to sneak by either McMurtry or the GSA with a little luck, but we would not count on it.

Will Rice College actually played quite well in the first half, forcing three interceptions, and challenged Hanszen College much more than the final margin indicates, but the real story in this game was Hanszen's dominance. Priyanka Duvvuru had three interceptions for touchdowns in the second half, and Hanszen's defense looked fast, aggressive and intimidating en route to accounting for all of the team's 20 points. Hanszen's offense did not look good in this game, but with a defense that lethal and Duvvuru flying around the field, it may not matter much.

This game was a truly dominant performance from Hanszen, one that we had been clamoring for in this space for weeks. Hanszen looked explosive on offense, scoring on big plays and racking up yardage, and airtight on defense, forcing several turnovers and stifling GSA all over the field in the process of shutting it out. This was a hard-fought, feisty matchup, and Hanszen impressed throughout.

Hanszen has the best player in the game and is on a roll right now, actually leading the league in point differential at +47. Hanszen will play Wiess next week in a rivalry game. These two teams battled it out last season, and with Wiess looking much improved this season and Hanszen looking absolutely lethal, it looks like it could be one of the best games of the year.

The South is now 9-2 against the North this year, and it looks like the South will get four teams into the playoffs. Amazingly, a deserving team from the South will still be left out; at the moment, Wiess is on the outside of the playoff picture looking in.

This game was pretty evenly matched throughout, a classic example of how looking simply at binary wins and losses can be misleading. Neither team truly looked better than the other, but the win will go a long way toward helping the GSA secure the top spot in the North. The North gets two teams into the playoffs automatically (as does the South, with the last two spots being wild cards), and it looks like these are the two that will advance. The GSA has won all of its divisional games but has yet to secure a win against the South, a good indicator of the talent disparity between the two divisions.