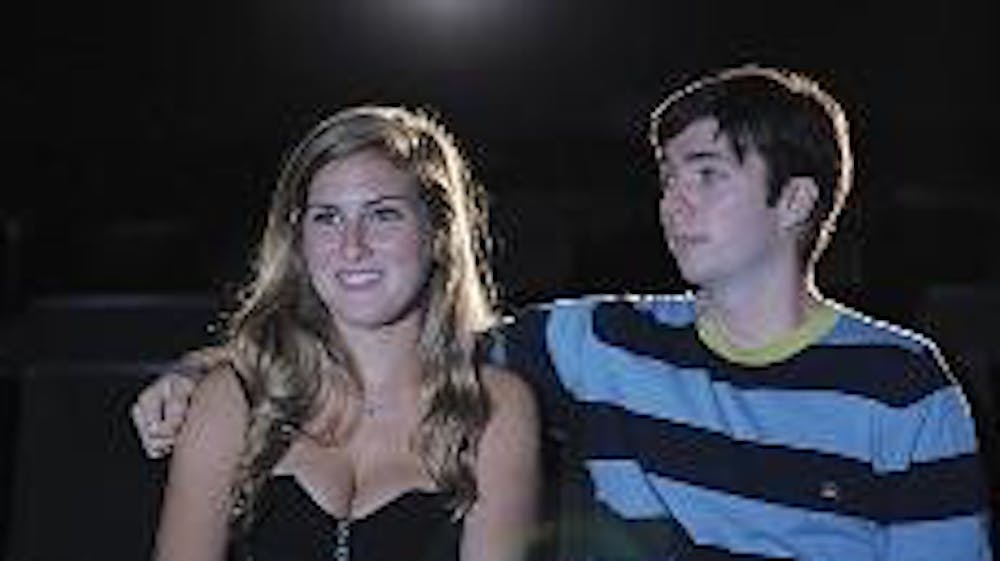 Wiess College junior Rebecca Jaffe gets cozy with Wiess senior Andres Goza at the Rice Media Center in "Can I...'"

Chennesi said anyone with an account can vote online one time per day per video and urged everyone to do so.

The first film, "Can I...?" was written by Chennisi and is about an awkward date at a movie theater where a boy, Wiess senior Andres Goza, asks his date, Wiess junior Rebecca Jaffe, if he can feel her breasts. The second film, "Your Boobs Can Save the World" was written by Pellerin and is about the world being brought to an end by an evil Dr. Apocolyto, Brown College sophomore John Mendell, who can only be stopped by Lindsay, played by Wiess sophomore Emily Nichol, feeling her breasts. The first film was set in the Rice Media Center and the second film was made in the Wiess basement.

The three decided to work together after Chennisi found the contest online as a way to produce content for portfolios and earn a $10,000 prize. Pellerin and Chennisi are both film majors who had met previously in class. Both had been hoping to collaborate with Lipinski, a chemical engineering major who has made several films while at Rice. Lipinski filmed the videos, Chennisi and Pellerin each wrote one of the two scripts, and all three collaborated on editing and other technical aspects of the film.

Lipinski said the team balanced each other well.

"Gabi has this sort of global view of the project - she sees the thing as a whole, and she's kind of like the coordinator who looks at everything and brings it together," Lipinski said. "Adrien is the exact opposite: He looks at the thing on a microscopic level and obsesses over every detail, and I'm somewhere in the middle. It was great to have a really good balance. They're obviously very experienced and everything went smoothly because of that."

Chennisi got the idea for "Can I...?" by reflecting on middle school.

"I was originally just thinking, 'When do people feel boobies?' because it's http://feelyourboobies.com, and I was like, 'OK, middle school, awkward 13-year-olds,'" Chennisi said. "The script was actually written for young teenagers, but the prospect of getting 13-year-olds to actually do that with a straight face was really daunting because I just don't think they would have been able to pull it off as gracefully as Becca and Andres did."

Initially, the team had planned to submit just one film because Chennisi said they thought people could only vote on one entry per day and they didn't want people to vote for one at the expense of the other. Just a day before the submissions were due, they discovered that they could submit two videos, so they decided to use Pellerin's idea as well.

"I had always wanted to make a disaster-type sequence that was reminiscent of the McGruber series on SNL and had kind of this absurd villain that was just being absurd and over-the-top because I thought that would be really fun to shoot," Pellerin said.

Though he had the idea for the script earlier, Pellerin said he did not have time to write it down until just a few hours before filming. He finished the script around 11 p.m. the night before the movie was due, the group filmed through the night and then spent the next day preparing the video for submission.

Nichol said acting in the video was a hectic but fun experience.

"It was obviously a funny mix of people because everyone was in SpoCo," Nichol said. "It was really great because Adrien was really flexible, so he was really open to us changing things, and we did a bunch of different takes that didn't make it into the final video."

Pellerin said he had written five alternate endings for the final sequence of the video, and then the group discussed which they liked best before deciding on the ending.

The tagline and graphic at the end of both movies were designed by Lipinski and Pellerin. Chennisi said she was impressed by how professional the graphic looked.

"We brainstormed how it was going to flow, and they wrote programs and some scripts to make the arrows move in the right path," Chennesi said. "It was really neat to watch. I don't really know how to do it, and they were really good at it."

Brown College senior Austin Edwards, who acted in Pellerin's video, said he enjoyed working on the project because it was the first time he had acted on film. He said he was pleased with the finished product.

"It was really smooth and professional," Edwards said. "I thought it was funny, and it had a good message."

If they win, the three have not yet decided how they are going to spend the prize money, but Chennisi and Pellerin said they were looking at new film equipment. Regardless, the three plan on collaborating on future projects.

"We all have stuff we can add to the team, and it just really made sense," Pellerin said. "I think it's a really cool trio, and we're definitely going to work together in the future on making more stuff."

Administration’s communications should be clear and realistic, not cautiously optimistic

Students deserve to know more given the substantial adjustments we will have to make in response. We implore the administration to be more transparent about their contingency plans.

Demands, not suggestions: When it comes to anti-racism on campus, the administration must listen to Black students