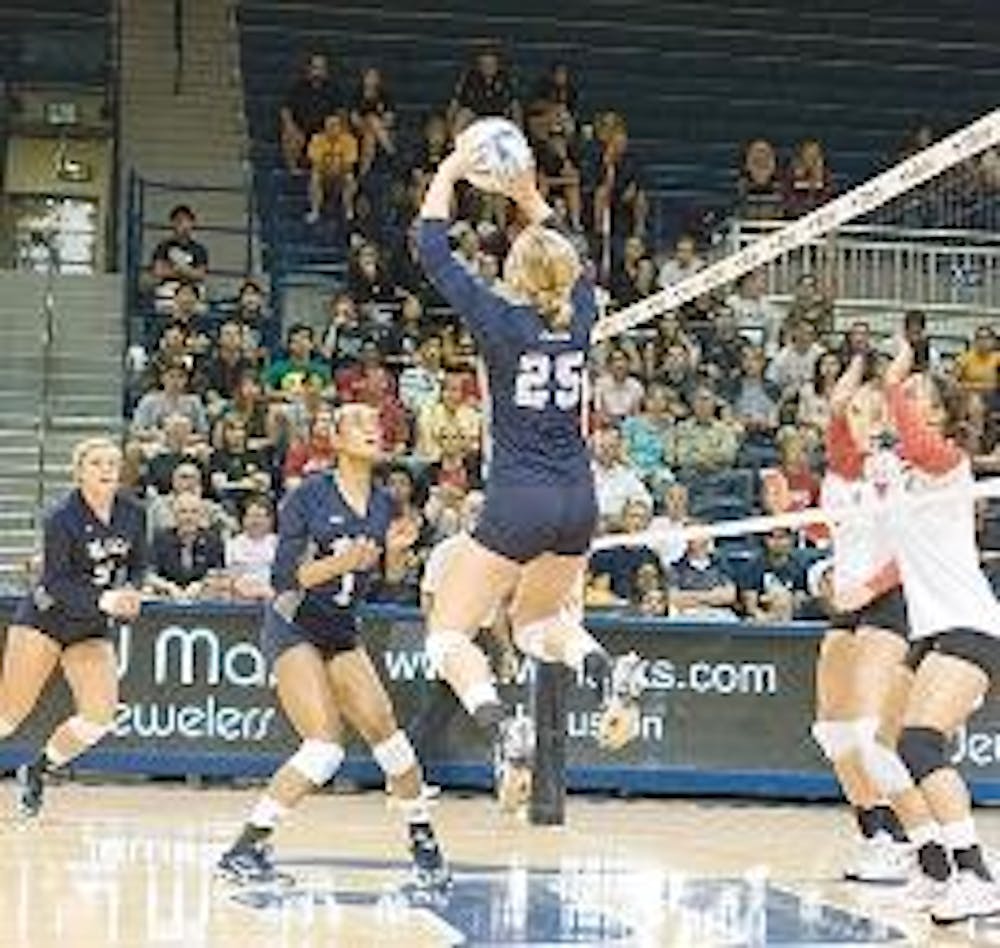 Senior Natalie Bogan (1) and sophomore Ashleigh McCord (5) rush to spike the set delivered by junior Meredith Schamun (25) against Oklahoma. The Owls fell to the Sooners 3-0 in the second match of the Mizuno Invitational.

If the first weekend of the volleyball team's season is an indication of the rest of the season, the Owls can mark their calendars for the NCAA tournament. Rice (4-1) opened its season with a bang, winning three of its first four matches in its own Mizuno Invitational, with the lone defeat coming at the hands of the University of Oklahoma. The Owls tacked on a victory against Sam Houston State on Tuesday. Rice played stellar defense throughout the matches, notching 32 blocks and 340 digs in the five matches. Furthermore, their hitting efficiency was on target with what they expected. Nonetheless, the Mizuno Invitational gave the team some areas they need to work on. In addition to their communication and movement, the Owls will look to improve their service game and blocking in practice before they head to San Francisco to continue their season this weekend.

Following their match against the Bearkats (4-1) the Owls will now look ahead to the USF Challenge, where they will play San Diego State University today and California State University-Northridge and the University of San Francisco on Saturday.

"We need to be steady and consistent, something we weren't this past weekend," Volpe said. "We're going to try to overpower them and use our balanced offense to our advantage because we are facing three strong defensive teams."

The offense has certainly been balanced after the first few matches. Rice opened its weekend against the Nicholls State University in the first game of the Mizuno Invitational, winning in four sets (25-16, 22-25, 25-11, 25-19).

Rice faced an early 4-1 deficit in the first set, but a 7-0 run, punctuated by a block by senior outside hitter Natalie Bogan - a member of the A l l - To u r n a ment team - gave the Owls an advantage they would not relinquish. Rice outscored Nicholls State 17-12 over the remainder of the set, as junior setter Meredith Schamun's 16 assists and sophomore outside hitter Ashleigh McCord's five kills led the Owls.

The second set went to the Colonels, but Rice righted the ship in the third set. The two teams traded points to start the fourth set before three straight points by the Owls gave them a 8-5 lead. Nicholls State never got within two points the remainder of the set, and Rice went on to win by a healthy margin, giving the team its first victory of the season.

The first set of the match was close throughout, with neither team opening a sizeable advantage until a McCord kill gave the Owls a 19-16 advantage. However, the Sooners scored nine of the next 12 points to take the first set.

Oklahoma jumped out to a 5-0 lead to start the second set and never looked back, outscoring the Owls 25-11 over the course of the set before edging the Owls in the final frame.

Despite the sweep, Volpe thought the Owls learned a lot from their match.

"We learned we've got to be more consistent on the ball-control side of things, as Oklahoma definitely out-ball-controlled us," Volpe said. "We know we can compete with anybody, and if we're going to lose a match, the opponent needs to outplay us."

Had they caught a few breaks, the Owls could have easily won the match against Oklahoma. Strong defense in the second set turned some exciting attacking by Rice into points for the Sooners, but Oklahoma's communication and steadiness turned out to be too much for Rice.

Rice bounced back on Saturday afternoon, beating the University of Central Arkansas in four sets (28-26, 24-26,25-22, 25-19). The Owls and Sugar Bears (1-2) traded points throughout the first set, with neither team taking a lead of more than three points. The Owls fell behind 24-22 late in the set, but battled back to take a 27-26 lead after a kill by a senior outside hitter Jessie Boulavsky, also a member of the All-Tournament team. A block by senior outside hitter Jennifer McClean gave the Owls the first set.

Rice opened up a 14-7 advantage to start the second set, but could not hold onto the lead as Central Arkansas clawed back to tie the match at a set apiece.

The Owls then opened the third set on a 5-0 run, capped off by a service ace by sophomore outside hitter Megan White, and never trailed the rest of the way, winning the set 25-22 before dominating the final set.

The Owls were just as dominant in the second set as they were in the first, taking an easy 25-12 win. Junior libero Tracey Lam played a large part in the set as her 25 digs kept the Owls defense going.

Rice opened the third set by taking a 6-1 lead, but the Huskies methodically chipped away to tie the score at 14, and Bogan's five kills were not enough to lock up the match for Rice.

Rice was unable to open any separation early on in the fourth set, taking a 5-4 lead. Aggressive attacking and errors by HBU propelled them to a 7-0 run and 12-4 lead. The Huskies never recovered as Rice won the set 25-15.

The Owls continued their non-conference slate against Sam Houston State on Tuesday evening, struggling early but finishing strong to win in three sets (25-22, 25-17, 25-13).

Rice trailed for much of the first set, struggling to put points on the board. Sam Houston State tied the set at 19 and again at 21 before the Owls took the lead for good. Freshman middle blocker Nancy Cole's impressive kill sealed the set.

Rice and Sam Houston State stayed close to start the second set and were tied at nine when the Owls turned their play up a notch. They won 16 of the next 22 points, led by Bogan's five points and a collection of errors by the Bearkats. The Owls dominated the third set, jumping out to a 9-4 lead and extending it to 18-11 before finishing out the set by winning seven of the final nine points.