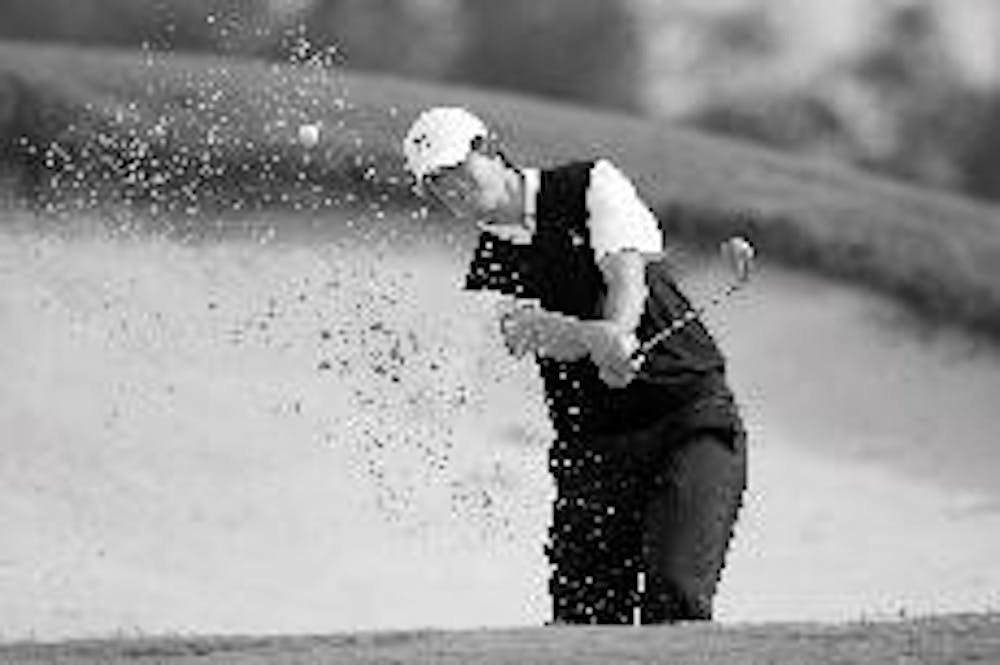 
Senior Kyle Kelley chips his way out of a sandtrap. Kelley aims to finish in the top 20 in the Conference USA tournament for the third consecutive year. The conference championships will be played at Red Tall Golf Club in Sorrento, Fla., April 19 - 21.

There's a reason teams play more than one match during a season: individual competitions alone do not determine a team's fate. Luckily for the men's golf team, disappointing finishes in three of the five fall tournaments did not eliminate them from postseason eligibility. Thus, the golf team hopes to build upon the fall's strong finish to create a repertoire that qualifies them for the NCAA championships. The golf team struggled with inconsistency and injuries throughout the 2007-'08 season. A lack of depth plagued the Owls, as an injury to then-junior Erik Petersen and the departure of another team member prevented them from fielding a consistent five-member group. While the team was not having a successful year to begin with, their performance in the Conference USA tournament, where they finished in 11th place, finally marked the season as a disappointment.

Rice began the fall season hoping to leave behind its follies of the past. However, a next-to-last finish in their season-opening match at the San Francisco Intercollegiate showed the team they still had work to do. The team rebounded with a middle-of-the-pack finish at the Kansas Men's Invitational and followed it up with a 10th-place finish at the Memphis Intercollegiate. The Owls followed that with another setback, finishing dead-last at the Prestige at PGA West, hosted by Stanford University.

Despite the poor performance, sophomore Robert Burrow said he feels the team was able to turn a negative experience into a positive lesson.

The Owls then played in the Stockton Sports Pacific Invitational, hosted by the University of the Pacific, and posted a third-place finish. Rice led the tournament heading into the final round and finished just six shots behind winner University of California-Davis to end the fall season on a high note.

"The Arizona event, Texas event, and the NC State event will be the three strongest fields we'll face this spring," head coach Drew Scott (Wiess '98) said. "However, the other four tournaments on our schedule, including our home event, are just as important."

Rice will host its own event, the Rice Intercollegiate, on Feb. 16th and 17th at the Westwood Golf Club. The Owls will then travel to Lafayette, La., to play in the 24th-annual Louisiana Classics. Afterwards, the Owls will participate in the Border Olympics in Laredo, Texas, on March 13 and 14. The Owls conclude their season at the Morris Williams Intercollegiate on March 30 and 31, the River Landing Intercollegiate on April 10 and 11 and finally the C-USA Tournament, hosted by the University of Central Florida, April 19-21.

With the loss of Addison Awe (Martel '08), Bobby Thomure and Zach Wilson, all members of the 2007-2008 golf team, this year's squad promised to be full of hopefully talented newcomers. While Awe, Thomure and Wilson contributed their share last season, Scott was pleased with the depth the three freshmen and sophomore were able to provide this year.

"I feel like we'll be a much deeper team this semester," Scott said. "With the newcomers filling the shoes of the guys that departed, we'll be significantly better, and we've already shown that this fall."

Burrow, a transfer from Rhodes College in Memphis, Tenn., has been the strongest contributor of the group of recruits. He played in all five events in the fall and has been working to regain his form following an elbow injury in Feb. 2008.

Freshman Tommy Mitchell, from the Woodlands, did not play in any of the fall's five tournaments. However, with the injury to junior Michael Buttacavoli, Mitchell has the opportunity to travel with the team, as do the two other freshmen, Erik Mayer and Ben Thorseth.

Mayer, hailing from Wisconsin, played in the Kansas tournament, finishing third on the team. However, he has had trouble adjusting to the stiff Division-1 competition that Rice faced in fall. Thorseth came into Rice as a highly-touted recruit after a great junior career. Thorseth won an AJGA even in August but has also struggled with the adjustment to the college game, playing in only one event in the fall.

The three freshmen will all have ample opportunity to travel with the team throughout the spring while the Owls wait for Buttacavoli to recover from a torn ACL, which he injured while running over Thanksgiving break. Buttacavoli was the lowest scorer for the Owls during the fall season, averaging a score of 73.64 with a low of 67 at the Pacific Invitational, where he finished tied for second.

While the team would love to have one of their best players available, Burrow once again looked to put a positive spin on the situation.

"Once again, when Buttacavoli got hurt, there was a lot of disappointment about his injury," Burrow said. "But at the same time, his injury forces everyone on the team to work harder, which we've done so far."

With the injury to Buttacavoli, junior Chris Brown also will be expected to step up for the Owls. Brown played in every event during his sophomore season and was one of the most consistent performers for Rice during the fall season. Brown is ranked fifth in the nation in driving accuracy despite not being a long hitter.

Senior Kyle Kelley, the team's captain, played in three events in the fall season and is one of the team's best ball-strikers. The Houston local has had an up-and-down college career, but his two top-20 finishes in conference tournaments prove his ability. Kelley looks to have his strongest season so far in his senior year.

Despite their sub-.500 record, the Owls still have a strong chance to make the postseason. Their remaining tournaments will give them the opportunity to bring their record to .500 or above, thus allowing them to qualify for postseason play. Even if they do not reach that mark, the winner of the C-USA Tournament receives an automatic bid to the NCAA Regional. Postseason play has been a goal for the Owls the entire season and a strong spring season will allow them to reach their objective.

"We played really well in our final tournament of the fall, and we need to use that as a springboard for the spring," Brown said. "We've been underachieving for so long, and now that we've got a taste of success, we need to keep it going and let it carry us into postseason play.